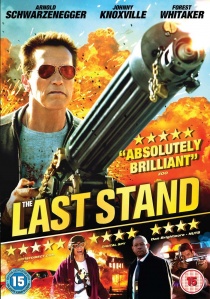 The ultimate action star is back in the rip-roaring blockbuster The Last Stand. Arnold Schwarzenegger (The Terminator movies, The Expendables 2) returns in his first lead role in ten years. The Last Stand is out on Blu-ray, DVD and Download from 27th May 2013, courtesy of Lionsgate Home Entertainment.

After leaving his LAPD narcotics post, Sheriff Owens (Szhwarzenegger) has resigned himself to a life of fighting what little crime takes place in sleepy border town Sommerton Junction.

But following a spectacular escape from an FBI prisoner convoy, the most notorious drug kingpin in the hemisphere is hurtling toward this ill-prepared town at 200mph in a specially outfitted super car. Owens and his unequipped force are the only thing standing in the cartel boss' way... And it's up to them to put up the last stand.

Co-starring Johnny Knoxville and Forest Whitaker, The Last Stand is full of intense action, thrilling car chases, cracking one liners and the return of Hollywood's greatest ever action star!

UHD
With all the heart and humour audiences expect from Walt Disney Animation Studios, Big Hero 6, released on 4K UHD for the first time 30th August 2021 and exclusive to Zavvi, introduces you to a ... END_OF_DOCUMENT_TOKEN_TO_BE_REPLACED
Top PicksView