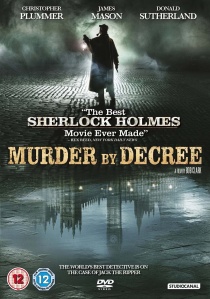 The inventive story has Holmes investigating the Jack the Ripper case making Murder By Decree a classy forerunner to From Hell.

Jack the Ripper's murders catch the attention of Sherlock Holmes but he does not receive the expected call from Scotland Yard because he is being purposefully excluded from the investigation. Instead, Robert Lees (Donald Sutherland: Don't Look Now), a psychic who volunteered information to the police about the murders, provides the Great Detective with the necessary incitement to action.

As the murders proceed, it becomes clear to all concerned that it is more important to stop them than to announce their solution and Holmes enters the fray with the help of his trusty aide, Dr. Watson (James Mason: Lolita). The former mistress of a "prominent personage", Annie Crook (Genevieve Bujold: Anne of the Thousand Days), provides crucial information leading to a final confrontation on London's docks.