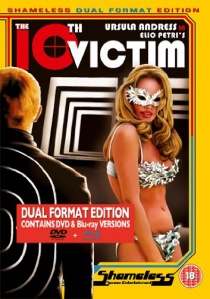 The 10th Victim, released on dual-format DVD and Blu-ray on 10th March 2014 courtesy of Shameless Screen Entertainment, has never been released in UK before!

Yet this film by Oscar® Winning director Elio Petri has earned Cult status wherever seen, not only because of its exquisite Pop-Art visuals, and numerous observation, but mostly because 007-sex-icon Ursula Andress (Dr No; Mountain Of The Cannibal God; The Nurse) sports another iconic bikini, and this time it literally is deadly...

Set in the near future, the film opens with Andress notching her penultimate kill in "The Big Hunt", a reality-TV style game show. The show selects both "Hunter" & "Victim" at random and they then chases one another around the globe: kill your 10th victim and you win Millions! Andress' next victim is the cool Marcello (Mastroianni) (8 1/2; La Dolce Vita) who's also needs one more kill to hit the jackpot!

The kinky fusion of sex and violence is powered by the chemistry between Mastroianni and Andress in this new Shameless release remastered from restored HD sources. In English. Complete and uncut.

The 10th Victim will be Shameless' first ever Dual Format release, containing both the DVD and the Blu-ray version of the film!