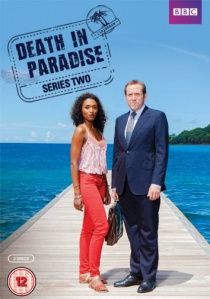 DI Richard Poole is still trapped on the small Caribbean island of Saint-Marie where the sun, sea and sand continue to irritate him, just as he irritates his long-suffering colleagues. Always most at home when he's at work, Richard's eye for detail and his incisive mind remain as sharp as ever - and the brilliantly instinctive DS Camille Bordey is able to fill in the blanks whenever the vagaries of human behaviour baffle her Inspector.

Whilst their opposing left brain/right brain approach to life can - and frequently does - cause personal conflict between Richard and Camille, it's also what makes them a crime-fighting force to be reckoned with - a force that is challenged by some intriguing and enigmatic murders over a new series of mind boggling mysteries.

With the often unorthodox, but vital assistance of police officers Dwayne and Fidel, they tackle an array of uniquemurders, from ancient pirate curses, voodoo festivals to murdered nuns. Richard also faces his first tropical hurricane, (one with a name!). And in true British style, a cup of tea is the key to a suspicious suicide. Sainte-Marie is certainly an island to keep Richard and his team on their feet and viewers guessing at every twist and turn.

UHD
Pixar Animation Studios presents Cars, the high-octane adventure comedy that shows life is about the journey, not the finish line, zooming in for the first time on 4K Ultra HD 19th July 2021, exclusive to Zavvi. END_OF_DOCUMENT_TOKEN_TO_BE_REPLACED
Top PicksView