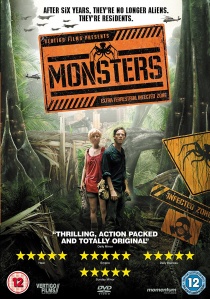 Following its hugely successful theatrical release that saw it earning Five Star reviews in Empire ("a sci-fi picture which never loses sight of the human factor an amazing achievement"), Total Film ("the most audacious debut since The Blair Witch Project"), the Financial Times ("a lollapalooza... so edgy it hardly needs monsters... a masterpiece of high-amp anxiety"), the Daily Express ("an intelligent, inventive film. highly recommended") and the Sunday Mirror ("a road trip blending romance with sci-fi thrills"), the critically acclaimed Monsters comes to DVD and Blu-ray on 11th April 2011 courtesy of Vertigo Films.

The winner of the Best Director, Best Achievement in Production and Best Technical Achievement awards at the 2010 British Independent Film Awards and recently nominated for the BAFTA award for Outstanding Debut by a British Writer, Director or Producer, Monsters was written, shot and directed by Emmy nominated and BAFTA award winning CGI animator Gareth Edwards (Perfect Disasters; Hiroshima), who, for his debut feature, "wanted to make a love story that didn't make him cringe, as well as a sci-fi movie where the premise wasn't totally unbelievable." To say that Edwards more than achieved his goal with Monsters would be something of an understatement.

Described as "a hugely impressive disaster-come-road movie that conveys almost Spielbergian promise" by the Sunday Express and "a horror film that has plenty of heart" by the Sunday Times, Monsters is a beautifully shot and totally absorbing movie boasting extraordinarily strong performances by its two leads, real-life couple Scoot McNairy (In Search Of A Midnight Kiss) and Whitney Able (All The Boys Love Mandy Lane), and featuring incredible visuals and special effects that belie its modest budget.

Soon after a NASA probe sent to collect samples from Jupiter's moon, Europa, crash-landed in Central America, strange new life forms began to appear in the area forcing half of Mexico to be quarantined as an infected zone. Six years later, US and Mexican military forces are struggling to contain the fully-grown alien creatures and to control their seasonal migration within the zone.

In the midst of the chaos caused by the creatures' unusually early migration is photojournalist Andrew Kaulder (McNairy), who is hoping to get at least one 'money shot' of them in action. But when his publisher boss' vacationing daughter Sam (Able) is found to be stranded in the area, Kaulder is charged with guaranteeing her secure passage through Mexico to the safety of the US border.

"A post-modern sci-fi... with a hugely involving love story" (The Guardian), the genre-busting Monsters is a "seriously impressive" (Mail on Sunday) and "remarkable piece of work" (The Observer) that will appeal as much to lovers of cool, indie relationship dramas as it will to fans of mainstream horror and sci-fi cinema. 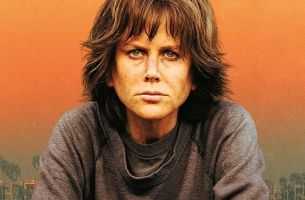 HotDVDBD
In Destroyer, released on DVD and Blu-ray 27th May 2019 from Lionsgate Home Entertainment, a police detective reconnects with people from an undercover assignment in her distant past in order to make peace. END_OF_DOCUMENT_TOKEN_TO_BE_REPLACED
Comments
BD Releases News Pick

BD
A stellar cast sizzles in Heat, a taut psychological drama about an obsessive detective and a brilliant thief whose fates are linked in the aftermath of a high-stakes securities heist, released on 4K UHD 8th August 2022 from ... END_OF_DOCUMENT_TOKEN_TO_BE_REPLACED
Top PicksView