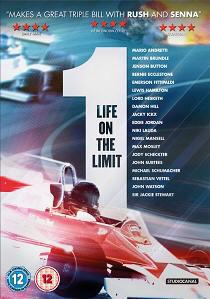 StudioCanal further mines the rich seam of real-life drama to be found in the world of Formula One as it releases mesmerising documentary 1: Life On The Limit digitally on 7th March 2014, followed by a Blu-ray and DVD release on 17th March 2014.

Narrated by Michael Fassbender, 1: Life On The Limit is an action-packed, cinematic documentary that channels the speed, excitement and abject danger inherent in this most glamorous of sports. The film charts Formula One's journey from its comparatively humble beginnings in post-war Britain, through to the game-changing events of the 1976 season recently examined in the smash hit Rush, as well as the untimely death of F1 superstar Ayrton Senna. In so doing, 1: Life On The Limit showcases a world where drivers were akin to rock stars and where safety definitely wasn't always put first.

Utilising rare archive footage and gathering the largest and most comprehensive selection of Formula One interviews ever collected, the film examines a sport that, even in its Golden Age, was stealing lives at a terrifying rate. With comment from Sebastian Vettel, Lewis Hamilton, Michael Schumacher, Bernie Ecclestone and Niki Lauda to name but a few, 1: Life On The Limit is not only an irresistible companion piece to the superb Rush but also a riveting, essential documentary in its own right.