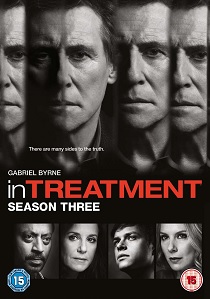 Golden Globe® winner Gabriel Byrne returns as psychoanalyst Dr Paul Weston alongside three new patients and a new therapist in this intriguing and thought-provoking final season. Each story is played out over the course of seven weeks with each appointment anchored on a specific day allowing viewers to follow a character in weekly instalments or watch from start to finish.

Set within the highly charged confines of individual psychotherapy sessions, the series revolves around Dr. Paul Weston (Byrne; Assault on Precinct 13, The Usual Suspects), who is still coping with the after-effects of his recent divorce and a move to Brooklyn to continue his practice. Whilst exhibiting an insightful and confident demeanor when treating his patients, Dr Weston struggles with a crippling insecurity whilst being counseled by his own therapist, Adele (Amy Ryan).

In the midst of new emotional and physical challenges (including hand tremors he fears may be the onset of Parkinson's Disease, which killed his father), Paul will be treating three new patients - Frances (Debra Winger), Sunil (Irrfan Khan) and Jesse (Dane DeHaan).

Dr Paul Weston. (Gabriel Byrne - The Usual Suspects) Fragile, complex and depressed; not circumstances you would expect from such an insightful therapist yet Fridays see Paul lean on the support of his own therapist, Adele. In need of weekly counselling, Paul works through the stresses of a pending malpractice case and the aftermath of his divorce.

Sunil. (Irrfan Khan -Slumdog Millionaire, The Darjeeling Limited) A native of Calcutta and recent widower, Sunil has begrudgingly moved in with his son's family in Brooklyn. Unhappiness with his new life takes hold and festers within Sunil, exacerbated by his son's American wife, whom he suspects of having an affair. As Paul encourages him to voice his frustrations, Sunil reveals a dark, secretive past - a past that awakens potentially violent impulses.

Frances. (Debra Winger - Rachel Getting Married, An Officer And A Gentleman) This aging stage and screen star is having difficulty remembering her lines for a major Broadway play and comes to Paul for help. But Paul discovers Frances's real anxiety stems from her sister's declining health - like their mother, Frances's sister is dying of breast cancer. As Frances struggles with the repercussions from her recent divorce, a teenage daughter who won't speak to her and the generic probability that she will fall victim herself to breast cancer, she seeks comfort and approval from Paul.

Jesse. (Dane DeHaan - True Blood, Law and Order) Gay teen, full of creativity and angst, wrestles with his identity and his relationship with his adoptive parents. Paul fights to instill a sense of belonging and self-worth in Jesse, but when Jesse's birth parents reintroduce themselves into his life, all Paul's work is threatened.

Adele. (Amy Ryan - Green Zone, The Wire) In order to get a new prescription for sleeping pills, an exhausted Paul visits a young, serious and intelligent therapist named Adele and is compelled to comfort deep-rooted fears about his health, his divorce, his patients and his all-encompassing relationship with former therapist Gina Toll.