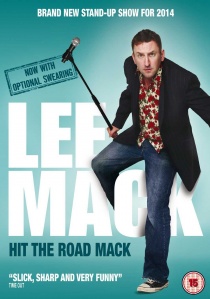 Lee Mack, the multi-award winning star of BBC One's Not Going Out and Would I Lie To You releases his first stand-up DVD in four years with Lee Mack - Hit the Road Mack. Filmed at London's legendary Hammersmith Apollo, Hit The Road Mack showcases Lee Mack at the very top of his game, leaving the audience roaring with laughter. The DVD is released on 24 November 2014, courtesy of BBC Worldwide, and is also available to download to own.

The Hit The Road Mack sell out tour started in September and has seen Lee play over 50 shows across 19 UK cities. Fans can expect to see plenty of Lee's trademark humour of well-crafted gags and sharp one-liners. Lee muses on the perils of everyday life while also sharing plenty of fun, quips and banter with the audience.

In addition to the 60 minute show, the DVD Extras include a Backstage Tour with Lee. Also included is a version of the show without swearwords.

HotDVDBDDIGITAL
With stunning revelations, glamorous journeys, and the arrival of the Jazz Age, Downton Abbey: A New Era, released on DVD and Blu-ray 15th August 2022 from Warner Home Video, will be the Crawleys' biggest adventure yet as they grapple with their future and new intrigue about ... END_OF_DOCUMENT_TOKEN_TO_BE_REPLACED
Top PicksView