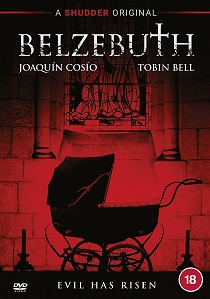 Pray for mercy, evil has risen in Emilio Portes' Belzebuth, a chilling Shudder Original gore-fest that descends to the depths of hell. The film is set for its UK Blu-ray debut from Acorn Media International on 13th September 2021 and will also be available on DVD and digital.

After the loss of his own child, Special Agent Emmanuel Ritter (Cosio) is called in to lead an investigation into a spate of deeply disturbing deaths involving young children. Things take an ominous turn when a former Vatican priest (Bell) is enlisted to help. When he uncovers a link to an ancient demon - the most evil one of all - the descent into twisted terror begins.

Belzebuth is a dark, terrifying new work of demonic possession.