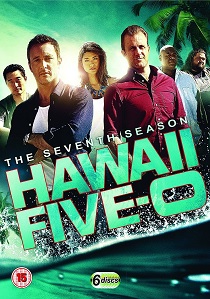 The action is back! Follow all the hard-hitting adventures of Hawaii's most elite crime-fighting team that cleans up the dirtiest crimes in paradise in Hawaii Five-0: Season 7, released on DVD 18th September 2017 from Paramount Home Entertainment.

The 25 episodes from the seventh season of the re-imagined drama follow an elite task force formed to investigate serious crimes in the Hawaiian Islands. Commander Steve McGarrett (Alex O'Loughlin), an ex-Navy SEAL, heads up the 'Five-0' taskforce. He is joined by Detective Danny Williams (Scott Caan), Chin Ho Kelly (Daniel Dae Kim) and Chin's cousin, Kono Kalakaua (Grace Park). Together they set out to maintain order in paradise and have to deal with such issues as state corruption, terrorism threats, homicide and human trafficking.

The episodes are: Ready to Play?, For Queen and Country, New Player, The Fire of Kamile Rises in Triumph, The Stand, House of Horrors, Mother and Son, Rite of Passage, Two Days in November, The Burden, Snatchback, The Deal, The Clouds Always Return to Awalua, Line in the Sand, Big Game, Crazy in Love, Hunting Monsters, Handle With Care, Exodus, The Fishhooks of the Fishers Become Entangled, The Water Is Dried Up, Black Tears, Prelude, A Croaking By Hinas Mudhen and The Life of the Land Is Perpetuated in Righteousness.

BD
Pixar Animation Studios presents Cars, the high-octane adventure comedy that shows life is about the journey, not the finish line, zooming in for the first time on 4K Ultra HD 19th July 2021, ... END_OF_DOCUMENT_TOKEN_TO_BE_REPLACED
Top PicksView