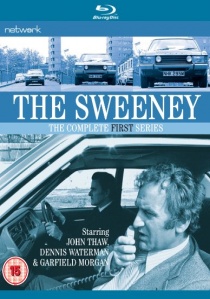 NewsTV SeriesDrama
News Article Go back to homepage
They are the Sweeney, son. And they haven't had any dinner... Remember what the fuss was all about by picking up this diamond 4-disc set which is available in High Definition for the first time on 10th September 2012 from Network DVD.
Morris Perry, Martin Read, John Alkin, Garfield Morgan, Dennis Waterman, John Thaw
David Wickes, Douglas Camfield, Terry Green, Tom Clegg
George Taylor, Lloyd Shirley, Mary Morgan, Ted Childs
Network
Unknown
10/09/2012
As an Amazon Associate we earn from qualifying purchases
Buy BD
Information

They are the Sweeney, son. And they haven't had any dinner... Relive the most ground-breaking British police drama ever made which coincides with the big screen remake. Regan and Carter are part of New Scotland Yard's infamous Flying Squad.

Mixing with London's seedy underworld they tackle the crimes to hard to handle for your everyday police officer. Remember what the fuss was all about by picking up this diamond 4-disc set which is available in High Definition for the first time on 10th September 2012 from Network DVD.

Seventies London has never looked this good. And neither has The Sweeney, son. The Series will also be reissued on DVD.

Rough, tough and politically incorrect in the way that only the best 70s drama series can be, 'The Sweeney' is one of the major television successes of the last fifty years. Featuring John Thaw as Detective Inspector Regan and Dennis Waterman as his loyal partner Detective Sergeant Carter, you can finally watch this series at a previously unseen level of quality.

The Sweeney - The Complete First Series will appeal to all fans of gritty crime dramas and it would be criminal not to have this gritty set in your Blu-Ray collection.