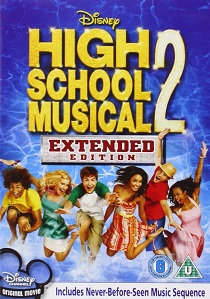 Packed with exclusive extras including a never-before-seen music scene featuring the crew grooving along to an exclusive song, the DVD is set to top every kid's Christmas list this year. Bonus features also include a fab sing-a-long version of the movie so fans can get in on the action and sing along with their High School Musical heroes.

The super-cool sequel sees the East Side Wildcats working at a Country Club during their summer break. School is out but it's not all fun and games for the gang. Scheming Sharpay attempts to break up Troy and Gabriella in a ploy to win his heart - and an all-important talent contest! It's another heart-warming tale of how people should be free to be whoever they want to be.

The hottest musical DVD of the year, High School Musical 2 features brand-new dance routines and more show-stopping songs, including the up-tempo What Time Is It? and love song You Are The Music In Me which will have kids moving their feet and singing along again and again. Relive the magic of the movie and experience High School Musical 2's show-stopping bonus features when the movie dances its way onto Disney DVD from 3rd December 2007.

Over summer vacation, the East High Wildcats are getting ready to enjoy their vacation and earn some money at summer jobs. Troy Bolton (Zac Efron) bags himself a job at Country Club, Lava Springs, not knowing that his job is a part of Sharpay's (Ashley Tisdale) plot to steal him from Gabriella (Vanessa Hudgens), who he is now going out with. Accidentally foiling Sharpay's plot, Troy not only helps Gabriella get a job as a lifeguard, but also lands jobs for Chad (Corbin Bleu), Taylor (Monique Coleman), Zeke (Chris Warren Jr), Martha (Kaycee Stroh), Kelsi (Olesya Rulin), Jason (Ryne Sanborn) and the rest of his Wildcat teammates.

To her horror, Sharpay also finds out Kelsi has written a duet for Troy and Gabriella to sing at the club's annual Midsummer Night's Talent Show. Sharpay is determined not to suffer a repeat humiliation of the talent show in High School Musical and forms her own campaign to make sure she's not upstaged again. As they go head to head, Troy is enjoying the life of the privileged set, and begins to question his values and his feelings for Gabriella.

HotUHD
Now more stunning than ever before, return to the stunning locations and epic adventures in Peter Jackson's Middle-earth in The Lord of the Rings Trilogy, arriving on stunning 4K UHD 30th November 2020 from Warner Home Video. END_OF_DOCUMENT_TOKEN_TO_BE_REPLACED
Top PicksView