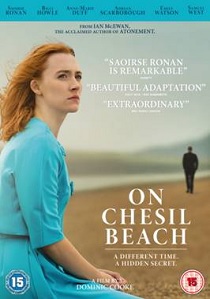 A gesture unmade or a word unspoken can change the course of an entire lifetime. Witness the touching story of unexpressed misunderstandings and fears between two lovers, when On Chesil Beach arrives on digital download from 10th September 2018 and on Blu-Ray and DVD from 17th September 2018, courtesy of Lionsgate Home Entertainment.

Summer, 1962: England is still a year away from the social and sexual revolution that characterised the Swinging Sixties; a revolution that determined the future of modern Britain. Florence (Saoirse Ronan; Brooklyn, Lady Bird) and Edward (Billy Howle; The Sense of an Ending) are newlyweds honeymooning on the dramatic coastline of Chesil Beach, Dorset. However, their idyllic romance is tempered by an old fashioned hotel, societal pressures and underlying tensions between the young couple. As they face a long anticipated wedding night, repressed fears boil over and cast an unexpected shadow over an evening that will define the lovers' marriage.

With remarkable performances from Ronan and Howle, On Chesil Beach is a stunning drama that is as heartbreaking as it is poignant, and is sure to captivate audiences when it arrives on home entertainment platforms this September.

Related Articles
Lady Bird, Brooklyn, How I Live Now, Byzantium, The Host, Hanna, The Way Back, City of Ember, I Could Never Be Your Woman, Mary Queen of Scots, Little Women, The Grand Budapest Hotel: The Criterion Collection, Ammonite
Before I Go To Sleep, Born Equal, Molly Moon And The Incredible Book Of Hypnotism, Murder: The Complete Series, Before I Go To Sleep, Is Anybody There?, The Salisbury Poisonings
Apple Tree Yard, Molly Moon And The Incredible Book Of Hypnotism, A Royal Night Out, Testament of Youth, Breaking the Waves, The Book Thief, The Politician's Husband, War Horse, Oranges and Sunshine, The Memory Keeper's Daughter, Apple Tree Yard, Equilibrium, The Happy Prince, Gosford Park, Chernobyl, Too Close
The Witness for the Prosecution, Motherfatherson
The Hollow Crown: The Wars of The Roses
The Incredible Adventures of Professor Branestawm, Miranda: The Finale, Upstairs Downstairs: Series 2, Upstairs Downstairs, Crashing: The Complete Series, Christopher Robin
Comments
UHD Releases News Pick