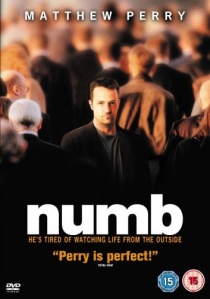 Matthew Perry (Studio 60 On The Sunset Strip; Friends) finally proves there is far more to him than playing variations of Chandler from "Friends" with a remarkable performance in the independent black-comedy-romance, Numb, released on DVD by Scanbox Entertainment on 21st July 2008, the debut feature from writer-director Harris Goldberg (screenwriter of Without A Paddle, The Master Of Disguise and Deuce Bigalow: Male Gigolo).

A surprisingly funny and uplifting story of a love-struck Hollywood screenwriter suffering from an acute depersonalization disorder that makes chronic depression look like a weekend at Disneyland, Numb also stars Lynn Collins (The Number 23; The Lake House; Bug), Kevin Pollak (Hostage), Mary Steenburgen (The Brave One) and Helen Shaver (The Keeper). Adding to the film's feel-good factor is a soundtrack by The Dandy Warhols, with additional song contributions from artists such as The Doves, Iron and Wine, Ivy and others.

Thirty-something screenwriter Hudson Milbank (Perry) is a man with serious mental issues. Already suffering in varying degrees from obsessive compulsive disorder, kleptomania and constant negative thoughts - all of which he blames on his poor relationship with his "crazy" mother (Shaver) - Hudson's psychological problems escalate when a marijuana binge triggers a further complaint. A victim of depersonalization disorder, Hudson begins to feel completely disconnected from his body and everything around him to the point where nothing seems real. His only distraction from the unreality of his life the Golf Channel on TV, which he watches for days on end. Out of the blue he meets Sara (Collins), perfect and quirky, and the only person around whom he can be himself.

But Hudson's various conditions take their toll on the couple's budding relationship and he is forced to seek help from yet another in a never-ending succession of doctors. A cognitive therapist, Dr. Cheryl Blaine (Steenburgen) appears to have the answers Hudson has been looking for, until she begins making sexual advances towards him and he realizes she's even crazier than he is. Convinced that Sara is the only one who can save him, Hudson knows his only hope is to win her back. Just when he believes all is lost, a chance encounter with a homeless man provides the long-absent motivation he needs to get his life back on track.

A "rom-com" with more intelligence than most, Numb is a darkly comic film about mental health and romance that features a revelatory performance from Matthew Perry, as well as plenty of laugh-out-loud moments, mostly courtesy of a scene-stealing turn from the impressive and very funny Mary Steenburgen.