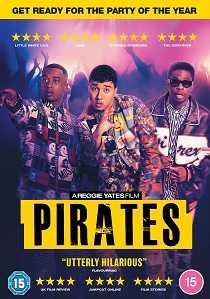 Meet Cappo, Two Tonne and Kidda three budding pirate radio DJs finding their way in the world. But with the new millennium looming, they're determined to see out the end of the century with a bang and party like it's 1999! Pirates is the acclaimed feature debut from Reggie Yates and it's now set for its home entertainment release this May.

Penned and directed by Yates, a man of many talents - beloved actor, TV and radio presenter - he now turns his hand to filmmaking with this outstanding, hilarious and thoroughly entertaining new coming-of-age feature. Set to a banging 90s garage soundtrack featuring music from Wookie, DJ Zinc, So Solid Crew and Sticky ft. Ms Dynamite amongst many others, it's a film that sounds as good as it looks.

Elliot Edusah, Jordan Peters and Reda Elazouar give outstanding performances as the life-long friends who just want to score tickets to the best party ever and have the ultimate New Year's Eve before it's time to sort their lives out.

Pirates is released on DVD, Blu-ray and Digital on 16th May 2022 courtesy of Picturehouse Entertainment.

New Year's Eve 1999. Cappo, Two Tonne and Kidda drive through London in their tiny Peugeot 205, pumping a live UK garage set from the stereo and arguing about their Avirex jackets and Naf Naf imports. As the 18-year-olds step into adulthood they know their lives and friendships are on the brink of change. Determined to end the century on a bang they drive across the city in a desperate search for tickets for the best millennium party EVER. Packed with laughs and featuring a great soundtrack, PIRATES is the outstanding debut feature from Reggie Yates.

DVD
In Brian And Charles, released on DVD and Blu-ray 10th October 2022 from Mediumrare, an inventor lives alone in a remote village in the countryside, inventing useless things out of found objects in his garage. That is until ... END_OF_DOCUMENT_TOKEN_TO_BE_REPLACED
Top PicksView