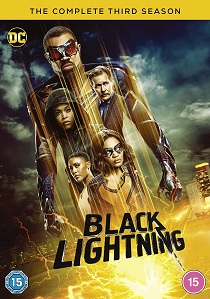 Jefferson Pierce (Cress Williams), respected educator and father of two, is also Black Lightning, superpowered protector of Freeland. And he doesn't fight alone. He is joined by his superpowered daughters, Anissa (Nafessa Williams), aka Thunder, and Jennifer (China Anne McClain), aka Lightning, as well as his ex-wife, metahuman expert Lynn (Christine Adams).

Together, the Pierce family combats the ills eroding their city, including a menacing gang that calls itself The 100 and infamous gangster Tobias Whale (Marvin Jones III). Worse, Freeland has been plagued by government-sponsored experiments and drug trafficking, creating metahumans and addicts while making Freeland the target of a dangerous foreign power, Markovia.

UHD
Pixar Animation Studios serves up a breakthrough comedy with something for everyone as Ratatouille arrives for the first time on 4K Ultra HD 26th July 2021, exclusive to Zavvi. END_OF_DOCUMENT_TOKEN_TO_BE_REPLACED
Top PicksView