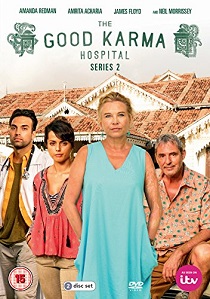 Amanda Redman is back as the formidable Dr Lydia Fonseca, head of the run down, but resourceful medical centre in the tropical Indian coastal town. Alongside her hardy team she's ready to face new challenges, and will her on-off romance with local bar owner Greg (Neil Morrissey) endure?

It's a year since junior doctor Ruby Walker (Amrita Acharia), moved to Kerala looking for a fresh start and a distraction from her broken heart, and now settled in her new life it's time for her to take on more responsibility.

When a storm hits and the hospital's generator fails, Ruby's new found confidence is put to the test, will she make the right decision or has she been pushed too far? A surprise connection to her Indian family gives Ruby a deeper understanding of her heritage and brings her closer to Dr Gabriel Varma (James Floyd), but she must decide if she's ready for romance.

Neil Morrissey (Line of Duty) returns as Greg, a local bar owner and Lydia's on-off boyfriend. After trying to make a go of things at the end of series one, the couple realise they might not be on the same page when talk of marriage arises.

As the medics face professional and personal challenges, their dedication and skills are pushed to the limits. Lydia, Ruby, and the rest of The Good Karma Hospital team will come to understand that by working together, they can face any challenge and rely on each other through good times and bad.

UHD
Based on the bestselling comic book, Vin Diesel stars as Ray Garrison, a soldier recently killed in action and brought back to life as the superhero Bloodshot, available 8th June 2020 from Sony ... END_OF_DOCUMENT_TOKEN_TO_BE_REPLACED
Hot PicksView