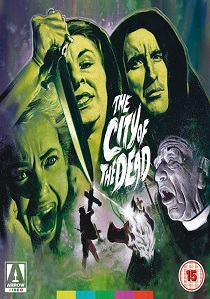 Christopher Lee was already a horror icon when he started filming The City of the Dead in 1959. Having played Frankenstein's Monster, Count Dracula and The Mummy for Hammer, this new picture would allow him to extend his range to the American Gothic and witchcraft in a small New England village...

Lee plays Professor Driscoll, an authority on the occult who persuades one of his students (Venetia Stevenson) to research his hometown, Whitewood, once the site of witch burnings in the 17th century. Booking herself into the Raven's Inn, she soon learns that devil worship among the locals hasn't been consigned to the past.

Produced by future Amicus founders Milton Subotsky and Max Rosenberg, and beautifully shot by Desmond Dickinson (whose credits ranged from Laurence Olivier's Hamlet to Horrors of the Black Museum), The City of the Dead is a wonderfully atmospheric and still shocking slice of horror that stands firmly alongside its Hammer contemporaries.

The City of the Dead is released on dual-format DVD and Blu-ray on 24th April 2017 from Arrow Video.