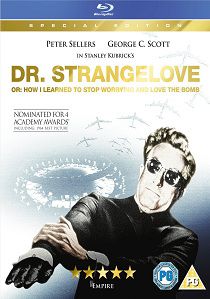 Dr. Strangelove: Or How I Learned to Stop Worrying and Love the Bomb (1964)

Sony Pictures Home Entertainment invites you to re-live Stanley Kubrick's satirical comedy Dr. Strangelove Or: How I Learned to Stop Worrying and Love the Bomb when it explodes on Blu-ray High-Def on 26th April 2010.

This celebrated film features a cadre of premier talent whose performances are taken to new heights in high definition. Peter Sellers (The Pink Panther, Lolita) stars in this uniquely dark comedy and displays his talent and versatility as he portrays the roles of British Exchange Officer, Group Captain Lionel Mandrake, President Merkin Muffley, and Dr. Strangelove, the wheelchair-bound ex-Nazi nuclear war expert.

Dr. Strangelove Or: How I Learned to Stop Worrying and Love the Bomb is an inimitable film that demonstrates political satire at its finest. Nominated for four Oscars including Best Picture, Best Director, Best Actor in a Leading Role and Best Screenplay, this cult classic was made to be seen in high definition. Exclusive to this Special Edition Blu-ray is a "The Cold War: Picture-in-Picture (PiP) and Graphic-in-Picture (GiP) Pop-Up Trivia Track" - while the movie is playing, optional pop up graphics (GiP) provide background information on the film, and occasionally video (PiP) pops up with cast and crew commentary. Other special features include an inside look into Dr. Strangelove, an interview with former Secretary of Defense Robert McNamara, and a remembrance of Peter Sellers.

As his aide, Captain Mandrake (Peter Sellers) scrambles to unlock a recall code to prevent the bombing, the U.S. President (Sellers again) calls a drunken Soviet Premier on the hotline claiming the proposed attack is a silly mistake, while the President's advisor, an ex-Nazi scientist, Dr. Strangelove (Sellers once again) verifies the existence of a dreaded Doomsday machine - a retaliatory device designed by the Soviets to end the human race once and for all! 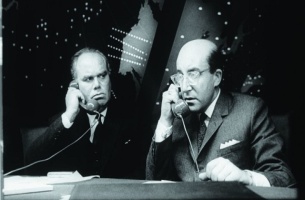 HotUHD
Dr. Strangelove Or: How I Learned to Stop Worrying and Love the Bomb, the wickedly dark comedy featuring Peter Sellers (in three roles) in the midst of impending nuclear war, is released on 4K ... END_OF_DOCUMENT_TOKEN_TO_BE_REPLACED
Comments
Hot Pick

HotUHD
After moving to a new town, two brothers discover that the area is a haven for vampires as the classic The Lost Boys is released on 4K UHD 20th September 2022 from Warner Home Video. END_OF_DOCUMENT_TOKEN_TO_BE_REPLACED
Top PicksView