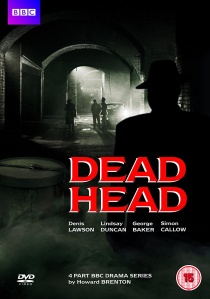 London based petty crook, Eddie Cass (Denis Lawson) agrees to pick up a package and courier it across the capital. When nobody answers the door at the drop off address Eddie opens the package and finds a woman's severed head in a hatbox. He panics and dumps it in the River Thames. Returning home Cass is kidnapped by the mysterious Eldridge (George Baker) and his heavies who inform Eddie that he has been framed for the murder. The hatbox belonged to his ex-wife and his fingerprints are all over it.

Eddie panics and goes off the rails - boozing and sleeping rough. Eventually he ends up at his ex-wife Dana's house, played by Lindsay Duncan. Whilst he sleeps there, his former partner informs on him and Eddie once again has to go on the run. The next morning the newspaper headlines reveal the discovery of the gruesome hatbox. Eddie's own private atom bomb has gone off...

Written in 50-minute episodes by playwright Howard Brenton and directed by Rob Walker the series has a top-notch cast including Denis Lawson (Bleak House, Holby City, Perfect Sense) as Eddie Cass, Don Henderson , George Baker (The Spy Who Loved Me, On Her Majesty's Secret Service, Hopscotch), Simon Callow (Amadeus, Four Weddings and a Funeral) and Lindsay Duncan (Rome, Under the Tuscan Sun)

Never repeated, but never forgotten - this much loved series from the BBC is set to be released in the UK for the first time on any home entertainment format. Available in a 2-disc Special Edition DVD from 15th April 2013.

Related Articles
Hampstead, Viceroy's House, Golden Years: Grand Theft OAP, The Sarah Millican Television Programme - Best of Series 1-2, Chemical Wedding, The Man Who Invented Christmas
Gifted, A Year In Provence, About Time, Le Week-End, Last Passenger, Come Fly with Me: Series 1, The Sinking Of The Laconia, Christopher and His Kind, Made in Italy, Around the World in 80 Days
The Justice Game: Series 1 and 2, The Ambassador: The Complete Collection, Inside No.9: Series 2, The Machine, Inside No.9: Series 1, Perfect Sense, Marchlands
Comments
UHD Releases News Pick