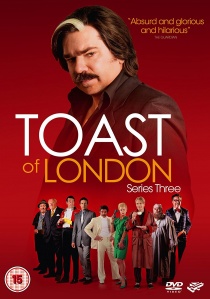 Meet Steven Toast (Matt Berry, The IT Crowd, House of Fools) -- actor, ladies' man and aficionado of some of Soho's finest drinking clubs.

With the often misguided assistance of his old-school 'retro' agent Jane Plough (Doon Mackichan, Smack the Pony, Plebs) and peculiar flatmate Ed Howzer-Black (Robert Bathurst, Cold Feet, Downton Abbey), Toast is forced to undertake voice-over work and advertisements. But things may be looking up for the thespian after he appears on Lorraine Kelly's chat show and meets American actor Jon Hamm.

UHD
Fast forward to the 1980s as Wonder Woman's next big screen adventure finds her facing a wide array of foes including Max Lord and The Cheetah as Wonder Woman 1984 flies in on Blu-ray and 4K UHD 22nd March 2021 from Warner ... END_OF_DOCUMENT_TOKEN_TO_BE_REPLACED
Top PicksView