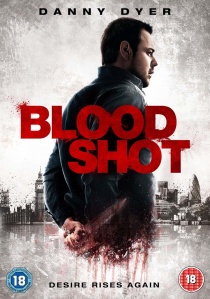 Danny Dyer is back and on top form in an unexpected and compelling new role in Blood Shot, arriving on DVD and digital platforms from 26th December 2014 courtesy of Signature Entertainment.

Dyer (TV's Eastenders, The Football Factory) leads as Phillip, a horror and action film worker who falls in love with a strange and gorgeous model, Jane, just arrived from America. Philip becomes infatuated with this beautiful stranger, and Jane soon reciprocates his affections. However this mysterious woman hides a dark, moving secret in her heart...

Little does he know, Phillip will soon be drawn into a nightmare more terrifying than even he can imagine. He endures a torrid night of passion and terror as Jane's shocking secret past threatens to destroy them both.

This gripping thriller will have you on the edge of your seat from start to finish. Let the massacre commence...