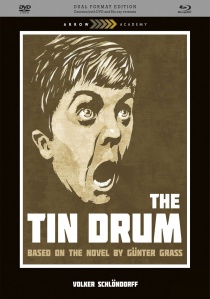 Adapted from one of the major works of postwar German literature (whose author later won the Nobel Prize), few films have such a powerhouse artistic pedigree. Winner of the Cannes Palme d'Or and the Best Foreign Film Oscar, The Tin Drum is released on dual format DVD and Blu-Ray from Arrow Academy on 9th Janurary 2012.

When Oskar Matzerath (the extraordinary David Bennent, just twelve at the time) receives a tin drum for his third birthday, he vows to stop growing there and then - and woe betide anyone who tries to take his beloved drum away from him, as he has a banshee shriek that can shatter glass. As a result, he retains a permanent child's-eye perspective on the rise of Nazism as experienced through petit-bourgeois life in his native Danzig, the 'free city' claimed by both Germany and Poland whose invasion in 1939 helped kick-start World War II. With the help of Luis Buñuel's favourite screenwriter Jean-Claude Carrière, director Volker Schlöndorff turns Günter Grass's magical-realist masterpiece into a carnivalesque frenzy of bizarre, grotesque yet unnervingly compelling images as Oskar turns his increasingly jaded eye and caustic tongue on the insane follies of the adult world that he refuses to join.

BD
A 13-year-old girl named Meilin turns into a giant red panda whenever she gets too excited in Disney and Pixar's 25th feature film Turning Red, released on DVD, Blu-ray and 4K UHD 2nd May 2022 from Walt Disney Home ... END_OF_DOCUMENT_TOKEN_TO_BE_REPLACED
Top PicksView