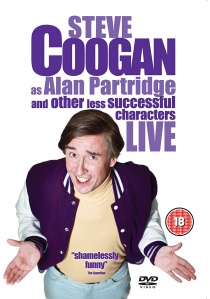 News Article Go back to homepage
There comes a time in every man's life when he must end his ten year hiatus from live performance and embark on his 86 date sell out tour. For Steve Coogan that time came in October 2009 resulting Steve Coogan Live, released on DVD on 23rd November 2009 from 2entertain.
Steve Coogan
David Tyler, Geoff Posner
Phil McIntyre, Steve Coogan
2entertain
Unknown
23/11/2009
Buy DVD
Information

Steve Coogan takes to the stage in his first stand-up tour in a decade. The star of I'm Alan Partridge and Saxondale, and the creator of Paul and Pauline Calf returns in a show featuring the characters that have made him a BAFTA and British Comedy Award winning comedy legend. With a cast of supporting actors, dancers and a live band on stage (lead by Glen Ponder from Knowing Me, Knowing You) - Steve Coogan Live is an extravaganza of comedy, with fantastic song and dance routines, state of the art graphics and big-screen technology.

The main 'event' sees the eagerly anticipated return of our Nation's greatest ex talk-show host and broadcaster - Alan Partridge. Alan's back, with a medley of Queen hits and his very own self-help motivational programme called 'Forward Solutions'. When it comes to super hi-tech corporate speaking, Alan's bang up to date, using computer imagery and wii technology in the form of an electronic 'gauntlet' he wears to pepper his lecture with amazing graphics which he literally throws at the huge projection screen on the stage. Alan also presents his soon-to-be-world-renowned play about the life of Sir Thomas More. Unfortunately, the production values of play fall way short of Alan's expectations.as one scene stumbles helplessly into the next. Alan is not happy, but of course, he is in no way to blame.

he show also sees the welcome return of full time Mancunian waster and social commentator ("Bag-o-shite") Paul Calf, and his 'sophisticated' sister Pauline. Paul regales the audience with tales of missed chances and lost loves, while the ever glamourous Pauline Calf performs an impressively choreographed number recounting her time spent with a host of minor celebrities in the decadent and lavish setting of a Marriott hotel. Pauline also treats us to an exclusive reading from her brand new spy novel about a female secret service agent set on bringing Al Qaeda to its knees - entitled 'She Shat Herself'.

Also featuring appearances from his other great comedy creations, including a drugs lecture from ex-roadie turned pest controller, Tommy Saxondale, and some psychotic ventriloquism from wannabe comedian, Duncan Thickett - this riotous character-comedy showcase is available on DVD from 23rd November 2009.

DVD
Get lit in the stylish ensemble caper, The Gentlemen, a star-studded, sophisticated action-comedy written and directed by Guy Ritchie, released on DVD, Blu-ray and 4K UHD 27th April 2020 from ... END_OF_DOCUMENT_TOKEN_TO_BE_REPLACED
Hot PicksView