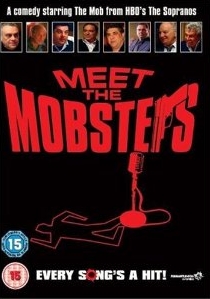 Released on DVD by Fremantle Home Entertainment on 29th December 2008, stars of 'The Sopranos' John Fiore, Vincent Curatola, Richard Portnow, Frank Santorelli, Joe Gannascoli, Vincent Pastore, Steven R. Schirripa and Tony Ray Rossi gang together to flex their combined comedy muscle in Meet The Mobsters, a cleverly played gangster flick satire about an Italian crooner who discovers that the road to fame is often more about who you know than what you know.

Johnny Slade (John Fiore) is a struggling lounge singer, down on his luck and ready to give it all up and go back to his regular blue-collar day job. That is until his long-suffering agent Jerry (Richard Portnow) gets a call offering Johnny an exclusive residency at a hot new club. The only catch is, he's given a new - and lyrically nonsensical - song to sing each night, all written by his mysterious benefactor, Mr. Samantha (Vincent Curatola).

Unknown to Johnny, his latest musical collaborator is actually a former high-profile mob boss, now living in hiding and unable to communicate with his gang members who are all under Federal surveillance. As his popularity begins to rise, Johnny notices a connection between the new songs and the local news headlines each following day. At first it all seems like a bizarre coincidence, but it soon becomes apparent to Johnny Slade that his most popular songs aren't the only 'hits' being performed night after night!

As the hits - of both kinds - keep coming, and the body count starts to rise as fast as his singing career, Johnny finds himself caught in the middle of a turf war between rival gangsters and the only thing keeping him alive is his voice.

Hailed by the Boston Herald as a 'hit flick sure to make a killing', Meet The Mobsters is an enjoyable and hugely funny gangster movie romp that proves a little bit of talent can be a dangerous thing.