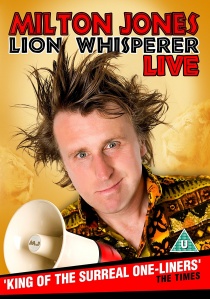 NewsStandup Comedy
News Article Go back to homepage
Multi award-winning Milton Jones, often fondly referred to - mainly by himself - as 'the weird bloke with the shirts from Mock The Week', releases the DVD of his live show Lion Whisperer on 21st November 2011 from Spirit Entertainment Limited.
Milton Jones
Geoff Posner
Spirit Entertainment Limited
Unknown
21/11/2011
Thank you for supporting DVD365.net when you order using the link(s) below. As an Amazon Associate we earn from qualifying purchases
Buy DVD
Information

Multi award-winning Milton Jones, often fondly referred to - mainly by himself - as 'the weird bloke with the shirts from Mock The Week', releases the DVD of his live show Lion Whisperer on 21st November 2011 from Spirit Entertainment Limited.

Lion Whisperer is the eagerly awaited second live stand up DVD from Milton, with his first Milton Jones - Live Universe Tour. Part 1: Earth released in 2010. Coming 'live' from Milton's dressing room at the start of the DVD, Milton Jones' grandfather gives an insight into the bizarre world of Milton... interrupted at an opportune moment by Milton arriving on stage at the Bloomsbury Theatre in London. Join the surreal one-liner merchant for over 60 minutes of family entertainment including a surprise appearance of his very own 'grandfather' exploring the weird and wonderful world of the Jones's.

Milton's unique charm has bought him legions of fans across the UK. He is proving to be one of the UK's brightest comedy stars, following his successful, twice extended 2010/2011 sell-out Lion Whisperer tour. He has appeared on shows such as Michael McIntyre's Comedy Roadshow (BBC1), Dave's One Night Stand (DAVE) and can soon be seen on the upcoming series of Live at the Apollo, due to air on BBC1 this autumn.

As a regular panellist on BBC1's Mock The Week and the current holder of the 2011 Chortle Awards Best headliner accolade, Milton's witty and punchy one-liners are accessible to all ages, making his shows and DVD releases a big hit for everyone. With a U certificate, unheard of for a live stand-up comedy DVD release, Milton Jones Lion Whisperer Live makes the perfect gift for all the family this Christmas.

As well as sell-out UK tours and international festival appearances Milton has starred in countless TV and radio shows including nine series of his very own Sony and British Comedy Award winning Radio 4 shows - The Very World Of Milton Jones and Another Case Of Milton Jones.

In addition to Mock The Week and Michael McIntyre's Comedy Roadshow, his other television credits include: Dave's One Night Stand (DAVE), Comedy Cuts (ITV2), Music Hall Meltdown (BBC4), 28 Acts (BBC3), The World Stands Up (Comedy Channel), The Comedy Store (Channel 5), Bring Me The Head Of Light Entertainment (Channel 5) and The Stand Up Show (BBC1).

Milton is also due to appear in his very own one-off sitcom. Due to air in October 2011, House Of Rooms is a brand new comedy, part of the C4 Comedy Showcase season, written by Milton Jones and fellow stand-up Dan Evans. House Of Rooms is being made by Objective Productions and will be a single-camera sitcom. Executive Producer for Objective Productions is Phil Clarke, Lee Hupfield is Producer and Ben Palmer is director.

BD
An intimate and moving story of childhood memories, Belfast is available to own on Blu-ray and DVD 25th April 2022 from Universal Pictures (UK). END_OF_DOCUMENT_TOKEN_TO_BE_REPLACED
Top PicksView