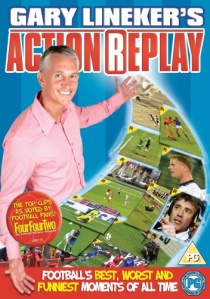 News
News Article Go back to homepage
Gary Lineker's Action Replay, released on DVD from Liberation Entertainment on 12th November 2007, features the most unforgettable moments in football history - as voted for by the fans themselves!
Gary Lineker, Kevin Day, Tom Watt, Lee Sharp
Unknown
Unknown
12/11/2007
Thank you for supporting DVD365.net when you order using the link(s) below. As an Amazon Associate we earn from qualifying purchases
Buy DVD
Information

Gary Lineker's Action Replay features the most unforgettable moments in football history - as voted for by the fans themselves! Throughout the summer readers of FourFourTwo have been voting for their favourite footballing moments of all time to compose the run down for the DVD, and Liberation Entertainment will be releasing all the action on DVD when Gary Lineker's Action Replay, is released from 12th November 2007.

A world class footballer and one of the BBC's leading sports presenters, Gary Lineker has a reputation as one of the UK's most identifiable sporting personalities. Now he presents a countdown of the best, worst and funniest footballing moments of all time, unveiling the top three classic moments in categories including Best Goal, Worst Own Goal, Best Skill, Worst Disappointment, Best Save, Worst 'Keeper Blunder, Best Moment, Worst Moment, Best Celebration and Funniest Moment - with the DVD culminating in a run through of the top five most magical moments ever.

Gary has been joined by a panel of experts on the sofa alongside him, with Match of the Day's resident pundit Kevin Day, Fleet Street journalist Tom Watt, and ex-Man Utd and England legend Lee Sharpe providing some legendary banter and hilarious commentary as the clips roll.

Gary and the panel discuss the all the stand-out moments, giving their expert insight and alternative views ... Often with tongue firmly in cheek! Whether its Beckham's goal from the halfway line, Maradona's Hand of God, the Pires-Henry penalty debacle or Tony Adams accidentally breaking his team mate's arm, relive them all and more here with Gary and his panel of experts.