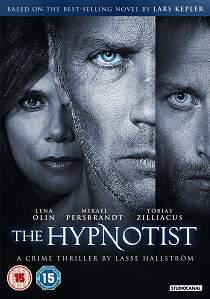 In the middle of a dark December night, psychiatrist Erik Maria Bark (Mikael Persbrandt - The Hobbit: The Desolation of Smaug) is woken by a telephone call from a hospital in Stockholm. Detective Inspector Joona Linna (Tobias Zilliacus) asks for his immediate help in treating an unconscious patient suffering from acute trauma. He hopes that Erik will be able to communicate with the young boy through hypnosis, enabling the police to question him. They intend to find out who so brutally murdered his parents and younger sister, in order to track down and save his mysteriously missing older sister before it is too late.

Directed by Lasse Hallström (What's Eating Gilbert Grape; Chocolat; Salmon Fishing In The Yemen) The Hypnotist, released on DVD by StudioCanal on 15th September 2014, is a tense and brutal crime thriller based on the Swedish novel of the same name by Lars Kepler.

With an incredible performance from Mikael Persbrandt as a troubled psychologist, The Hypnotist breaks new ground for the hugely popular nordic noir genre that has already given us modern crime classics such as The Killing and The Girl With The Dragon Tattoo.

HotDVDBDDIGITAL
With stunning revelations, glamorous journeys, and the arrival of the Jazz Age, Downton Abbey: A New Era, released on DVD and Blu-ray 15th August 2022 from Warner Home Video, will be the Crawleys' biggest adventure yet as they grapple with their future and new intrigue about ... END_OF_DOCUMENT_TOKEN_TO_BE_REPLACED
Top PicksView