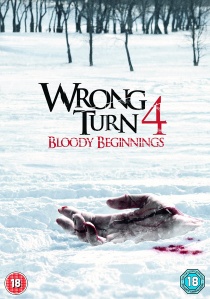 Discover the origins of everyone's favourite inbred mutant hillbilly cannibal family of 3 Finger, Saw-Tooth and One-Eye in the next horrifying instalment of the well loved Wrong Turn franchise when Own Wrong Turn 4: Bloody Beginnings arrives on Blu-ray and DVD on 27th August 2012 from Twentieth Century Fox Home Entertainment.

It's 1974 and deep in the West Virginia wilderness, a family of inbred hillbilly cannibals are being held in an isolated asylum for the violent and mentally ill. The asylum soon becomes deserted when the inbred family escape and take sadistic and gratuitous revenge on their captors....

Decades later, a group of college students take a wrong turn and seek refuge in the now-abandoned asylum after a blizzard derails their plans for a weekend winter break. But when the students encounter the medical ward's most frightening former patients, now fiendishly famished residents, their only choice is to fight back...or die trying!

Learn how the flesh-eating siblings earned their nicknames in this gorefest where heads roll, limbs are ripped from their sockets and bodies are hung, drawn and quartered!

Written with a killer script and directed by Declan O'Brien (Wrong 3: Left For Dead, Wrong Turn 5), Wrong Turn 4: Bloody Beginnings is so rammed with DVD & Blu-ray extras for you to feast on, it's no surprise it was deemed too shocking for cinemas. If that's not enough to satisfy your blood thirsty appetite then you can gorge on and devour the Wrong Turn 1-4 DVD box-set which is also out to own 27th August 2012.