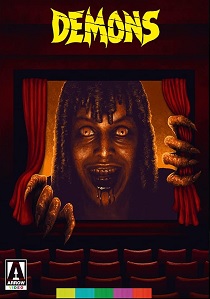 Lamberto Bava and Dario Argento bring you THE Gonzo Horror movie of the 1980s with Demons, a frenzied slice of gore heavy shock cinema that gives up on logic and instead assaults the screen with a riot of X-rated violence, face chewing demons and pounding heavy metal.

In a mysterious cinema, an audience are watching a brutal horror flick when the horror rips out of the screen, unleashing a swarm of slathering demons who are intent on spreading their evil plague across the globe. Time to tool up and take no prisoners... The Demons are coming!

Arrow Video is proud to present this horror classic in a sumptuous 4K restoration, more vivid and terrifying than ever before, alongside a wealth of bonus features old and new, making this the ultimate experience in celluloid terror.

DVD
For the first time in the cinematic history of Spider-Man, our friendly neighborhood hero's identity is revealed in Spider-Man: No Way Home, released on DVD, Blu-ray and 4K UHD 4th April 2022 from Sony Pictures Home ... END_OF_DOCUMENT_TOKEN_TO_BE_REPLACED
Top PicksView