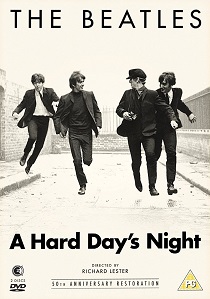 NewsSpecial InterestMusic
News Article Go back to homepage
The year is 1964 and Beatlemania is in full swing. The biggest band on the planet are about to make their big screen debut in A Hard Day's Night. To celebrate its 50th Anniversary a new 4k digital restoration special edition will be released on DVD and Blu-ray on 21st July 2014, courtesy of Second Sight Films.
Ringo Starr, George Harrison, Paul McCartney, John Lennon, Wilfrid Brambell
Richard Lester
David V. Picker, Walter Shenson, Denis O'Dell
Second Sight Films
1 hour 24 minutes
21/07/2014
#AHardDaysNight50thAnniversary
Thank you for supporting DVD365.net when you order using the link(s) below. As an Amazon Associate we earn from qualifying purchases
Buy DVD
Buy BD
Information

The year is 1964 and Beatlemania is in full swing. The biggest band on the planet are about to make their big screen debut. The film is A Hard Day's Night, a seminal piece of filmmaking that shows The Beatles as they've never been seen before.

To celebrate its 50th Anniversary the film will be presented in a new 4k digital restoration approved by director Richard Lester, with three audio options - a monoaural soundtrack in addition to newly created stereo and 5.1 surround mixes supervised by sound producer Giles Martin at Abbey Road Studios. The film will be available as a special edition DVD and Blu-ray release on 21st July 2014, courtesy of Second Sight Films.

A Hard Day's Night follows a "typical" day in the life of the Fab Four as they try to make it to their big show. As the title track roles we see John, Paul, George and Ringo mobbed by a group of fervent fans as they catch a train to London along with their manager Norm (Norman Rossington - The Longest Day), his assistant Shake (John Junkin - Hooray For Laughter) and Paul's troublesome Grandfather (Wilfred Bramble - Steptoe and Son).

A series of hilarious escapades follow, with Grandfather bribing a butler for his clothes to go to a casino, Ringo leaving the band to go solo and ending up in a police station and John's disagreements with a disgruntled TV producer (Victor Spinetti - Help). Will the boy's make it in time for their big concert?

This is all set to a brilliant soundtrack of classic Beatles tracks including I Should Have Known Better, And I Love Her, Tell Me Why, If I Fell and Can't Buy Me Love, and features a stand out supporting cast including comedienne Anna Quayle, cartoonist Bob Godfrey, TV host Robin Ray, dancer Lionel Blair, Harrison's future wife Patti Boyd, and director Lester himself.