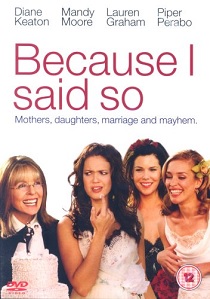 NewsComedy
News Article Go back to homepage
A mother's love knows no boundaries in Because I Said So, an irresistible comedy about the complex bond between mothers and daughters, coming to DVD on courtesy of Entertainment In Video in the wake of its £1 million UK box office gross.
Piper Perabo, Lauren Graham, Tom Everett Scott, Gabriel Macht, Mandy Moore, Diane Keaton
Michael Lehmann
Jessie Nelson, Karen Leigh Hopkins, Michael Flynn, Paul Brooks
Entertainment in Video
1 hour 42 minutes
04/06/2007
Thank you for supporting DVD365.net when you order using the link(s) below. As an Amazon Associate we earn from qualifying purchases
Buy DVD
Information

A mother's love knows no boundaries in Because I Said So, an irresistible comedy about the complex bond between mothers and daughters, coming to DVD on courtesy of Entertainment In Video in the wake of its £1 million UK box office gross.

The inimitable Diane Keaton (Somethings Gotta Give, Annie Hall, ather of the Bride) brings her unique comic charm to the role of Daphne Wilder, a meddling mother of three beautiful, spirited daughters played by Mandy Moore (American Dreamz, The Princess Diaries), Lauren Graham (The Pacifier) and Piper Perabo (The Prestige, Cheaper by the Dozen, Coyote Ugly). Stephen Collins (7th Heaven, Blood Diamond), Tom Everett Scott (That Thing You Do!, ER) and Gabriel Macht (The Good Shepherd) complete the cast as the men who try to win the affection of the Wilder women.

Directed by Michael Lehmann (The Truth about Cats and Dogs, Heathers), Because I Said So takes a fiercely funny look at family dynamics and asks the universal question: when, if ever, is a mother's job finished?

In order to prevent her youngest from making the same mistakes she did, Daphne decides to set Milly up with the perfect man. Little does Milly know, however, that her mother has placed a newspaper ad in order to find him.

Comic mayhem unfolds as Daphne continues to do the wrong thing for the right reasons...all in the name of love. 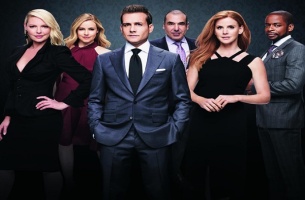 BD
Experience the thriller influenced by the astounding real-life story of the Gucci family and their unexpected legacy in House Of Gucci, available on Blu-ray and DVD 21st February 2022 from Universal Pictures (UK). END_OF_DOCUMENT_TOKEN_TO_BE_REPLACED
Top PicksView