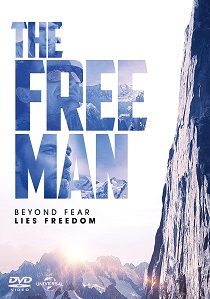 NewsSpecial Interest
News Article Go back to homepage
Bringing a breathtakingly cinematic sensibility and narrative construction to the world of extreme sports, The Free Man, available on DVD on 24th April 2017 from Universal Pictures (UK), is as beautiful a film as it is a thrilling one.
Jossi Wells, The Flying Frenchies
Toa Fraser
Matthew Metcalfe
Universal Pictures (UK)
1 hour 24 minutes
24/04/2017
#TheFreeMan
Thank you for supporting DVD365.net when you order using the link(s) below. As an Amazon Associate we earn from qualifying purchases
Buy DVD
Information

Freedom is defined as the power of self-determination attributed to the will; the quality of being independent of fate or necessity, as Olympic freestyle skier Jossi Wells learns when he partners with The Flying Frenchies to find out what it really means to be free in the powerful documentary The Free Man, available on DVD on 24th April 2017 from Universal Pictures (UK).

To reach the level of liberty encapsulated by the concept of being truly free is both a physical and mental endeavour that many will risk their lives to obtain. Is life worth risking for the feeling of conquering fear and becoming truly free? These are the questions Jossi Wells must ask himself as he meets extreme sports performance artists, The Flying Frenchies, and takes on the challenge of his lifetime thousands of meters above the ground.

Directed by Toa Fraser (Dean Spanley, Giselle), who brings a breathtakingly cinematic sensibility and narrative construction to the world of extreme sports, The Free Man is as beautiful a film as it is a thrilling one.

Shot in New Zealand and France, the film offers a rare insight into the story of men who push themselves to the point of no return; men who quite literally stare into the abyss and who embrace the fact that any moment at the top of a peak or on the face of a cliff could be their last.

Produced by Matthew Metcalfe (Beyond The Edge, McLaren) in his fifth collaboration with Toa Fraser, The Free Man is a film that once seen, is impossible to forget.

BD
A stellar cast sizzles in Heat, a taut psychological drama about an obsessive detective and a brilliant thief whose fates are linked in the aftermath of a high-stakes securities heist, released on 4K UHD 8th August 2022 from ... END_OF_DOCUMENT_TOKEN_TO_BE_REPLACED
Top PicksView