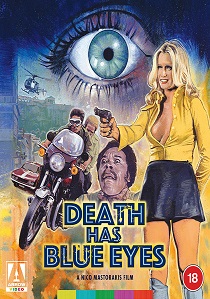 Death Has Blue Eyes is a gripping paranormal action thriller with shades of giallo from the director of the cult classic video nasty Island of Death (1976).

After fleeing from a series of assassination attempts, it soon becomes clear that Geraldine herself might not be quite whom she seems, as the two young men find themselves caught up in a political conspiracy of international dimensions.

In his debut feature, maverick filmmaker Nico Mastorakis presents us with a generous meze of non-stop car, bike and helicopter chases, a bevy of beautiful girls with guns, sensational softcore sex scenes, psychic thrills and Cold War political intrigue set against the picturesque landscapes of 70s Greece, all presented for the very first time in a new HD master in both widescreen and full-frame versions.

Death Has Blue Eyes is released on Blu-ray 5th April 2021 from Arrow Video, with the first pressing including an Illustrated collectors' booklet featuring new writing by Julian Grainger

HotDVDBDTV
DCI Tom Brannick returns, as the murder of a crooked accountant unravels a trail of greed that threatens to expose the true identity of the legendary assassin, codenamed, Goliath in Bloodlands: Series 2 released on DVD and Blu-ray 14th November 2022 from Dazzler Media. END_OF_DOCUMENT_TOKEN_TO_BE_REPLACED
Top PicksView