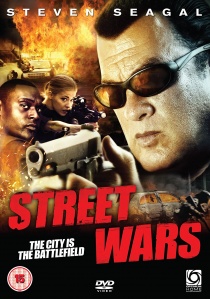 Elijah Kane (Steven Seagal, Under Siege, Born To Raise Hell) is as good as they come; he leads an undercover team of Seattle-based cops who target major criminals in the North Western territory, taking them down with their own unique brand of brutal street justice.

Street Wars, released on DVD and Blu-Ray by Optimum Home Entertainment on 25th April 2011, follows Kane and his team as they encounter a flood of new street-lab drugs that spikes the body count amongst teens in Seattle and try to uncover their source.

If that wasn't enough, Kane's team is forced to do some "community service", acting as security guards for Savon (Byron Mann), an arrogant documentary filmmaker making a film of the region's criminal underbelly, who is set on exposing the slums of the greater Seattle area at any cost, even if it means risking the lives of Kane's hard-knock team.