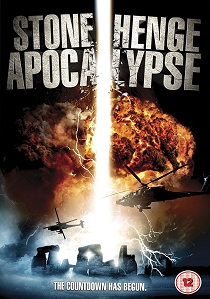 When Jacob Glaser, a disgraced award-winning scientist turned conspiracy theorist and pseudo-science radio talk show host, is alerted to unusual electromagnetic energy fields occurring throughout the globe, his initial investigations lead him to Stonehenge. Somehow, the stones have begun to move independently and are building up enough energy to vaporise humans within a certain range.

Jacob's unfounded theory is that Stonehenge is the key part of a massive alien terraforming machine connected to other historical sites around the world that are now in the process of modifying the planet for new forms of life, to the detriment of humans.

Meanwhile, in the US state of Maine, a former colleague of Jacob's has discovered an underground pyramid linked to the ongoing events at Stonehenge and is actively working towards the destruction of mankind in the hopes that he and his followers can survive the coming apocalypse and be the rulers of the next era of life on earth.

When Jacob discovers the existence of a key that he believes is capable to switching off the doomsday machine, he sets about getting his hands on it before the military can commence a series of planned nuclear air strikes on the sites responsible for the electromagnetic emissions that have begun to signify the end of humankind.

DVD
One of the most compelling and conflicted characters in Sony Pictures Universe of Marvel Characters comes to the big screen as Jared Leto transforms into the antihero Michael Morbius as Morbius is released on 4K Ultra HD, Blu ... END_OF_DOCUMENT_TOKEN_TO_BE_REPLACED
Top PicksView