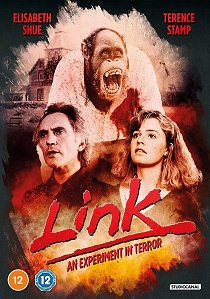 Inspired by research on violence amongst chimpanzees, this chilling fantasy-horror from cult director Richard Franklin stars Elisabeth Shue in an early film role, alongside fellow Oscar nominee and sixties screen icon Terence Stamp as a single-minded anthropologist who sets in motion a terrifying chain of events.

Jane, an American zoology student, takes a summer job at the lonely English cliff-top home of one of her lecturers who is exploring the link between man and ape. Soon after her arrival he suddenly vanishes, leaving her to care for his three chimps: Voodoo, a savage female; the affectionate, child-like Imp; and Link - a circus ape trained as the perfect servant and companion.

Soon a disturbing role reversal takes place in the relationship between master and servant, and Jane becomes a prisoner in a simian house of horror. In her attempts to escape she's up against an adversary with several times her physical strength - and the instincts of a bloodthirsty killer...

Link is released on DVD and Blu-ray 1st February 2021 from StudioCanal.