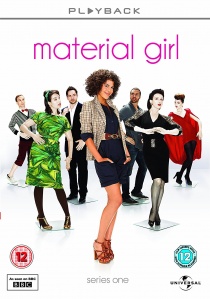 Material Girl is a romantic comedy about a young, talented, beautiful fashion designer who has to fight against an evil ex-boss, a sexy but devilish business partner and the snobby fashionistas establishment to get her break in work and love. Now Universal Pictures (UK) are releasing the excellent new BBC romantic comedy DVD on the 22nd February 2010.

Material Girl also starts Dervla Kirwan (Doctor Who) is Davina Bailey, the queen bee of the fashion world who will do anything to hold onto her crown and is ruthless in her treatment of aspiring and possibly threatening newcomers. She wants to remain the designer of choice for every celebrity.

Finally the cast of Material Girl is rounded off by Michael Landes (Love Soup), who plays Marco a brilliant and gifted entrepreneur who is determined to make Ali the star she deserves to be. The show has been produced by Carnival Film the company has produced over 500 hours of popular drama and comedy for television, cinema and theatre, both in the UK and US which has resulted in more than 70 national and international awards and nominations, including Oscars, Emmys, BAFTAs, Royal Television Society, Oliviers and TONY Awards. Amongst the other shows produced by Carnival are Hotel Babylon, As If, Poirot, Jeeves & Wooster, Rosemary & Thyme and Bugs, and ground breaking mini-series such as Traffik, The Grid, Porterhouse Blue and Whitechapel, and the feature film Shadowlands. Later this year Playback will also release ENID starring Helena Bonham Carter.

If you love fashion and great a great rom/com you are going to love Material Girl.