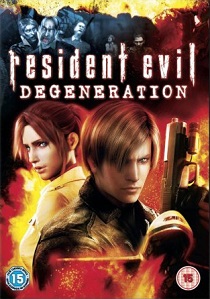 Seven years after the destruction of Raccoon City, fan favourites Leon and Claire are back as the war against the zombies rages on in Resident Evil: Degeneration co-produced by CAPCOM Co., Ltd. (CAPCOM®) and Sony Pictures Entertainment Japan Co., Ltd. This full length, original CG-motion picture is based on the popular video game franchise and arrives on Blu-ray High-Def, DVD and PSP in the UK on 12th January 2009

The "Umbrella Incident" that took place in Raccoon City ended with a missile attack ordered by the government intended to wipe out the deadly zombie virus. Following this catastrophe, the Umbrella Corporation's stock plummeted, bankrupting the business giant. Seven years later, at an airport in the Heartland of America, a commercial airliner unwittingly delivers some deadly cargo. Now, in an airport beginning to fill with the undead, the horrific disaster is about to repeat itself.

Resident Evil : Degeneration comes equipped with an arsenal of exciting special features, including a sneak peek at the Resident Evil 5 video game, the official "The Generation of Degeneration" featurette, character profiles, voice bloopers, a trailer collection, and a special interview with the motion-capture actor who portrays "Leon." Exclusive to the Blu-ray Disc is the groundbreaking Interactive Picture-in-Picture (I-PIP), which gives viewers real-time access to multiple picture-in-picture streams. Flip through feature-length animatics, motion capture and storyboard channels as they run concurrent to the movie. Fans won't want to miss the excitement when Resident Evil: Degeneration arrives on 12th January 2009.

Coinciding with the home video release, CAPCOM will release a mobile game based on the Resident Evil: Degeneration film. Players take control of Leon Kennedy as they battle zombies, infected dogs and horrific tyrants through as many as 50 pulse-pounding missions. The game will be available on most UK and North American carriers by the end of the year.

BD
An intimate and moving story of childhood memories, Belfast is available to own on Blu-ray and DVD 25th April 2022 from Universal Pictures (UK). END_OF_DOCUMENT_TOKEN_TO_BE_REPLACED
Top PicksView