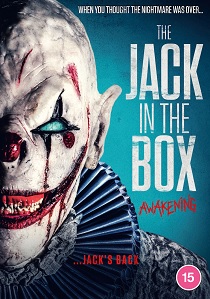 A killer clown is on the rampage in knockout chiller The Jack In The Box: Awakening, released on DVD & Digital 3rd January 2022 by 4Digital Media.

Move over Pennywise - creepy clown The Jack's back, and this time he's here to slay - in the sequel to the 2019 horror favourite The Jack in the Box. This time round The Jack makes a dreadful deal with a dying woman to ensure he gets his six victims.

Written and directed by Lawrence Fowler, the creator of the original film, that Geek Legion of Doom said gave "Annabelle a run for her money", it stars Matt McClure (Penny Dreadful), Nicola Wright (Devil Djinn), and James Swanton (Host, The Banishing) as The Jack.

Mixing elements of Hellraiser and Killjoy with The Conjuring universe, and featuring outstanding creature design, shocks a-plenty and some fantastically spooky locations, this a cracking standalone sequel in what promises to be a long-running and popular horror franchise.

Terminally ill heiress Olga Marsdale acquires a mysterious gothic box containing a captured demon - Jack. The powerful entity within makes a deadly deal with Olga and her devoted son Edgar - deliver six victims to Jack and Olga will live. They trap several unsuspecting victims for him within the vast crumbling mansion - but can they deliver all six before it's too late? Or will Amy, the young and innocent woman recently hired to look after the estate turn out to be more than a match for both the family... and The Jack?

DVD
The world's most lethal odd couple - bodyguard Michael Bryce and hitman Darius Kincaid - are back on another life-threatening mission as The Hitman's Wife's Bodyguard arrives on DVD, Blu-ray and 4K UHD 6th September 2021 from ... END_OF_DOCUMENT_TOKEN_TO_BE_REPLACED
Top PicksView