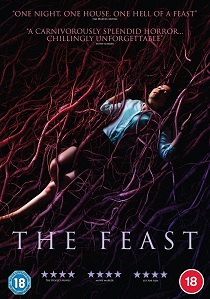 When a wealthy family and their guests gather for a dinner party in the remote Welsh countryside, they have little idea of what awaits them. Hosted at their luxurious new house, the family have a valuable mining venture at stake and the atmosphere is tense.

The arrival of a mysterious young woman who has been hired as a waitress brings a quiet, unsettling presence to the evening. As the night progresses, she soon begins to challenge the family's beliefs, unravelling the illusion they've created with slow, deliberate, and terrifying consequences.

BD
In Brian And Charles, released on DVD and Blu-ray 10th October 2022 from Mediumrare, an inventor lives alone in a remote village in the countryside, inventing useless things out of found objects in his garage. That is until ... END_OF_DOCUMENT_TOKEN_TO_BE_REPLACED
Top PicksView