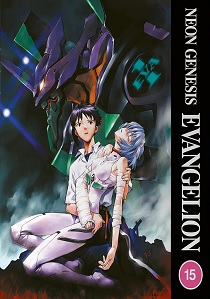 Bring home a landmark moment in anime history this holiday with Hideaki Anno's Neon Genesis Evangelion, a ground-breaking series that blends a powerful character-driven story with visually striking animation and hard-hitting action, which Anime Limited are excited to be bringing to Blu-ray for the very first time in the UK and Ireland on 6th December 2021.

Whether you're a fan after the best way to own your favourite series or someone discovering Neon Genesis Evangelion for the first time, you won't want to miss the chance to own this Complete Collection that contains the entire original saga in one package. Not only will you be able to relive all of Shinji, Rei, and Asuka's fan favourite and heart-wrenching moments from the 26-episode television series, but this release also includes the feature film duology of Evangelion:Death (True), and the mind-bending follow-up The End Of Evangelion, which filmmakers voted as among the 100 best animated movies of all time in a TimeOut 2014 poll.

One of the most celebrated anime of all time, Neon Genesis Evangelion tells the story of Shinji Ikari, a teenage boy who becomes the reluctant last line of defence for humanity when his distant father orders him to pilot the Unit 01 mecha and do battle with mysterious beings called "Angels". The series is often credited as revitalising the Japanese anime industry following its premiere in 1995, with it demonstrating the medium's ability to tell stories of philosophy, and intellectual and emotional characters unlike anything seen before in animation on a global scale.

Neon Genesis Evangelion became a watershed moment in the growth of anime fandom worldwide with a legacy as a pop-culture juggernaut that continues to this day.

The Neon Genesis Evangelion Complete Collection also contains over 5 hours of bonus features, including classic trailers, music videos, and more. The release includes the series in both its original Japanese language with English subtitles, as well as the 2019 English language dub.

In 2015, Tokyo-3 is under attack from "Angels", extraordinary beings that possess various special abilities. Multipurpose Humanoid Decisive Weapon Evangelion is the only method to counter these Angels, and Shinji Ikari is chosen as its pilot. The battle for the fate of humankind has begun. But exactly what are the Angels? What is destined for the young pilots? And what will become of humanity?

BD
In Brian And Charles, released on DVD and Blu-ray 10th October 2022 from Mediumrare, an inventor lives alone in a remote village in the countryside, inventing useless things out of found objects in his garage. That is until ... END_OF_DOCUMENT_TOKEN_TO_BE_REPLACED
Top PicksView