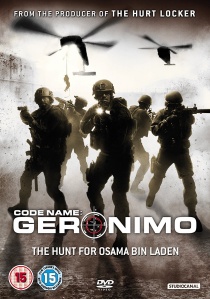 Released on DVD and Blu-Ray by StudioCanal on 24th December 2012, from the producer of the multi-Academy Award winning "The Hurt Locker" comes Code Name: Geronimo, the gripping dramatic account of the US government's hunt and audacious military operation to apprehend Osama bin Laden.

Taking its title from the original alias of the covert mission to apprehend Osama bin Laden, Code Name: Geronimo is the gripping account of what has been described as the greatest manhunt in history.

When a tip-off from a Guantanamo Bay detention camp detainee provides the CIA with valuable intel regarding the possible location of Osama bin Laden's secret hideout, the wheels are set in motion to verify the information and then to eliminate the United States' most reviled enemy.

Convinced they have found their target, the American authorities appoint an extraordinary group of Navy SEALS to take part in one of the most clandestine and audacious military operations of a generation. Initially unaware that their target is the most wanted man in the world, the members of SEAL Team Six begin training for their mission, one that will culminate in a daring night-time raid on the bin Laden compound. This is their story.