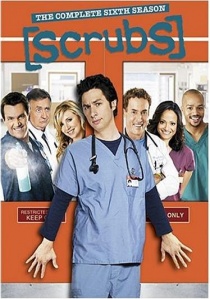 Make it a new year's resolution to catch up with the Emmy Award winning Scrubs : The Complete Sixth Season when its back doing the rounds on DVD from 14th January 2008 from Buena Vista Home Entertainment. Hitting the shelves in a specially packaged box-set that contains all 22 episodes along with a selection of side-splittingly funny bonus features, the next instalment of this hit series is sure to cure anyone's January blues.

The series picks up with wacky medical intern J.D., played by Zach Braff, and follows more of his crazy exploits and skewed visions of reality at the Sacred Heart teaching hospital. Geared around J.D.'s off the wall observations on the professional and personal lives of his friends and colleagues, the sixth series delivers more scalpel-sharp writing, fast-paced dialogue, surreal fantasy sequences and laugh out loud gags than you can shake a stethoscope at.

Bonus features include an in-depth look at the making of the "My Musical" episode in which Tony Award-winning composers of Avenue Q, Robert Lopez and Jeff Marx created a mini musical for the Scrubs cast which was nominated for no less than five accolades at this year's Emmy Awards©. The episode follows patient Stephanie D'Abbruzzo, from the original cast of Broadway's Avenue Q, as she complains that she's constantly hearing music. Meanwhile, the entire cast of Scrubs gets into the act and the exclusive behind-the-scenes featurette takes fans from rehearsal to performance.

Additional bonus features include deleted scenes, bloopers, audio commentaries and much more to tickle the funny bones of Scrubs fanatics. Book an appointment with the doctors and nurses of Sacred Heart when Scrubs : The Complete Sixth Season checks onto DVD.

UHD
The end of the line is only the beginning in a wild, non-stop thrill ride through modern-day Japan as Bullet Train is released on DVD, Blu-ray and 4K UHD 24th October 2022 from Sony Pictures Home Entertainment END_OF_DOCUMENT_TOKEN_TO_BE_REPLACED
Top PicksView