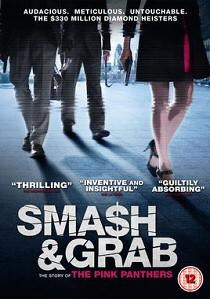 Based on a true story, Smash & Grab, released on DVD by Kaleidoscope Home Entertainment tells the story of the Pink Panthers.

With incredible unprecedented access, gang members Mike and Lela tell their story using a unique and cutting edge animation style (for obvious reasons they wouldn't show their faces). In addition we see an interview with Lucky, a courier, and Mr Green the fence, or final link in the illicit diamond trade.

Intercut with their stories are Inspector Yaan Glassey of the Geneva Anti-Criminal Brigade and Captain Hervé Conan of the Paris police. They describe their ambitions and achievements in the global mission to track the gang down and take them to court.

Smash & Grab - the inside story of the world's most infamous criminal gang.

3D-BD
The surviving members of the resistance face the First Order once again, and the legendary conflict between the Jedi and the Sith reaches its peak as Star Wars: The Rise of Skywalker is released on ... END_OF_DOCUMENT_TOKEN_TO_BE_REPLACED
Top PicksView