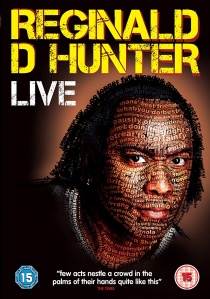 Recorded live at two sell-out shows from London's iconic HMV Hammersmith Apollo in June 2011, Reginald D. Hunter Live features outstanding material from the cutting-edge stand-up comedy. In the twelve years since he began performing, Reginald D Hunter has become one of the UK Comedy industry's best-known and most distinctive performers. His is often brutally honest, frequently controversial but always meticulously measured and hilarious!

A three time Perrier award nominee, Hunter is no stranger to the stage making his first appearance in 2002 and gaining a nomination for the Perrier Best Newcomer award. In 2006, Reginald won The Writers' Guild Award for Comedy for a show, which he presented for a season in London's West End and on a national tour of the UK. Born in Georgia, USA, Reginald moved to the UK ten years ago where he studied at RADA and went on to perform in good old fashioned Pantomime. His comedy career was launched when he took part in an open spot as a dare.

Reginald has been a regular panelist on Sir Trevor Macdonald's News Knight, and was invited to appear as part of the prestigious Montreal Comedy Festival. He is also a well-known face on primetime television shows 8 Out Of 10 Cats, Never Mind The Buzzcocks and QI and is a frequent guest on Have I Got News For You.