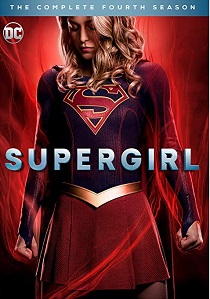 Based on the DC character, Kara Zor-El (series star Melissa Benoist) decides to embrace her superhuman abilities and be the hero she was always meant to be in Supergirl: Season 4, released on DVD and Blu-ray 23rd September 2019 from Warner Home Video.

Twelve-year-old Kara escaped the doomed planet Krypton with her parents' help at the same time as the infant Kal-El. Protected and raised on Earth by her foster parents, Jeremiah and Eliza Danvers (guest stars Dean Cain and Helen Slater), Kara grew up in the shadow of her foster sister, Alex (series star Chyler Leigh), and learned to conceal the phenomenal powers she shares with her famous cousin, Superman (Tyler Hoechlin) in order to keep her identity a secret.

Years later, Kara was living a "normal life" in National City and still concealing her powers, when a plane crash threatened Alex's life and Kara took to the sky to rescue her. In the aftermath, Kara decided she could no longer sit on the sidelines and came out as Supergirl. She now balances her job as a reporter for CatCo Worldwide Media, alongside her famous friend and Editor in Chief, James Olsen (series star Mehcad Brooks) with her work for the Department of Extra-Normal Operations (DEO), a super-secret government organisation run by her sister Alex.

As Kara mentors a new reporter at CatCo, Nia Nal (new series regular Nicole Maines), and tries to use the power of the press to shine a light on the issues threatening to tear the city apart, Supergirl takes to the skies to battle the many villains who rise up in this era of divisiveness.

But how does Supergirl battle a movement when she, herself an alien, represents one of the main things people are fearful of?