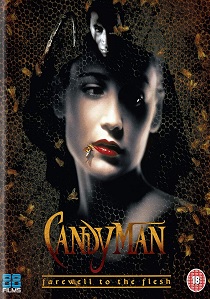 88 Films returns a true terror titan to UK Blu-Ray in this buzzin' edition of Candyman: Farewell To The Flesh, released 25th March 2019!!

The sequel to Clive Barker's original 1993 shocker, this 1995 follow-up brings the ever-threatening Tony Todd, and his hook-handed bogeyman, back to the big screen but this time in New Orleans. As before, our antagonist is a mix of nightmarish skin-slicer and seductive-voiced stalker - but one thing is for sure: not many characters will be leaving this sanguine-splashed sequel with their insides still intact!

Also featuring Kelly Rowan (Assasins) and directed by the Oscar winning Bill Condon (Chicago), Candyman: Farewell To The Flesh is one of the highest achievements in nineties horror sequel-dom!

UHD
With all the heart and humour audiences expect from Walt Disney Animation Studios, Big Hero 6, released on 4K UHD for the first time 30th August 2021 and exclusive to Zavvi, introduces you to a ... END_OF_DOCUMENT_TOKEN_TO_BE_REPLACED
Top PicksView