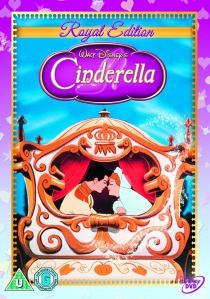 Celebrate the Royal Wedding in style with Disney's special edition DVD Cinderella: Royal Edition, available on 4th April 2011 from Walt Disney Studios Home Entertainment for a limited time only. So special is this release, that each copy of the magical tale has its own unique limited edition code as a memento of the grand occasion.

The special edition Cinderella DVD contains a sparkling array of bonus material to ensure the excitement lasts as long as possible, including - deleted scenes, music videos and glimpses behind the scenes to see how the film was created.

Walt Disney's beloved Cinderella, based on one of the world's greatest fairy tales, has captivated audiences for generations with its spellbinding story, memorable music, spectacular animation and unforgettable characters. Experience the magic with this special edition - and audiences will believe that their dreams really have come true.

The beautiful Cinderella spends her days doing chores for her cruel stepmother Lady Tremaine and her spoilt daughters Drizella and Anastasia. As she works she daydreams of romance and a better life, sharing her wishes with her animal friends, including the loveable comic mice Gus and Jaq. When the King holds a ball in honour of his son Prince Charming, all the women in the kingdom are invited. Cinderella's initial excitement turns to sadness when her stepfamily stops her from attending, but with the spectacular arrival of her fairy godmother all Cinderella's dreams look set to come true.

With a "Bibbidy-bobbidi-boo!" Cinderella's fairy godmother transforms a pumpkin into a beautiful coach, Cinderella's rags into a gorgeous gown and her animal comrades into her footmen, horses and coach driver. All Cinderella must do is remember one golden rule; she must be home before midnight when the magic wears off. At the ball Cinderella makes a stunning arrival and her own stepfamily does not even recognise her out of her rags. She spends her evening dancing with the Prince but as they begin fall in love, the clock starts to strike and Cinderella must flee the party. As the magic begins to disappear all that remains is a single glass slipper. Will it be enough to reunite the Prince with its rightful owner and love of his life?

BD
In The Undoing, released on DVD and Blu-ray 22nd March 2021 from Warner Home Video, a chasm opens up in the seemingly perfect life of a successful therapist: a violent death, a missing spouse, and a ... END_OF_DOCUMENT_TOKEN_TO_BE_REPLACED
Top PicksView