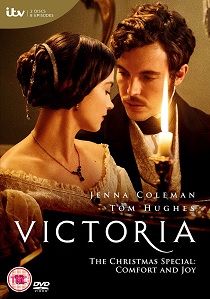 Victoria and Albert have very different expectations for a family Christmas, and the arrival of a young African orphan at the Palace puts them at loggerheads. Victoria is uncharacteristically melancholy in the festive season.

Albert, on the other hand, is gripped by an obsession with staging the perfect family Christmas, and ruffles feathers as he transforms the Palace into a magical festive wonderland. But Victoria is furious to find that, in fact, Albert has invited two very unwelcome house guests.

'Tis the season for historic enmities to finally climax, new romances to blossom and sacrifices to be made... but a terrifying accident calls the couple's priorities into question, and Victoria and Albert finally realise that they must leave behind the pain of their upbringings if they are to give their own children the Christmas that they never had.

DVD
The world's most lethal odd couple - bodyguard Michael Bryce and hitman Darius Kincaid - are back on another life-threatening mission as The Hitman's Wife's Bodyguard arrives on DVD, Blu-ray and 4K ... END_OF_DOCUMENT_TOKEN_TO_BE_REPLACED
Top PicksView